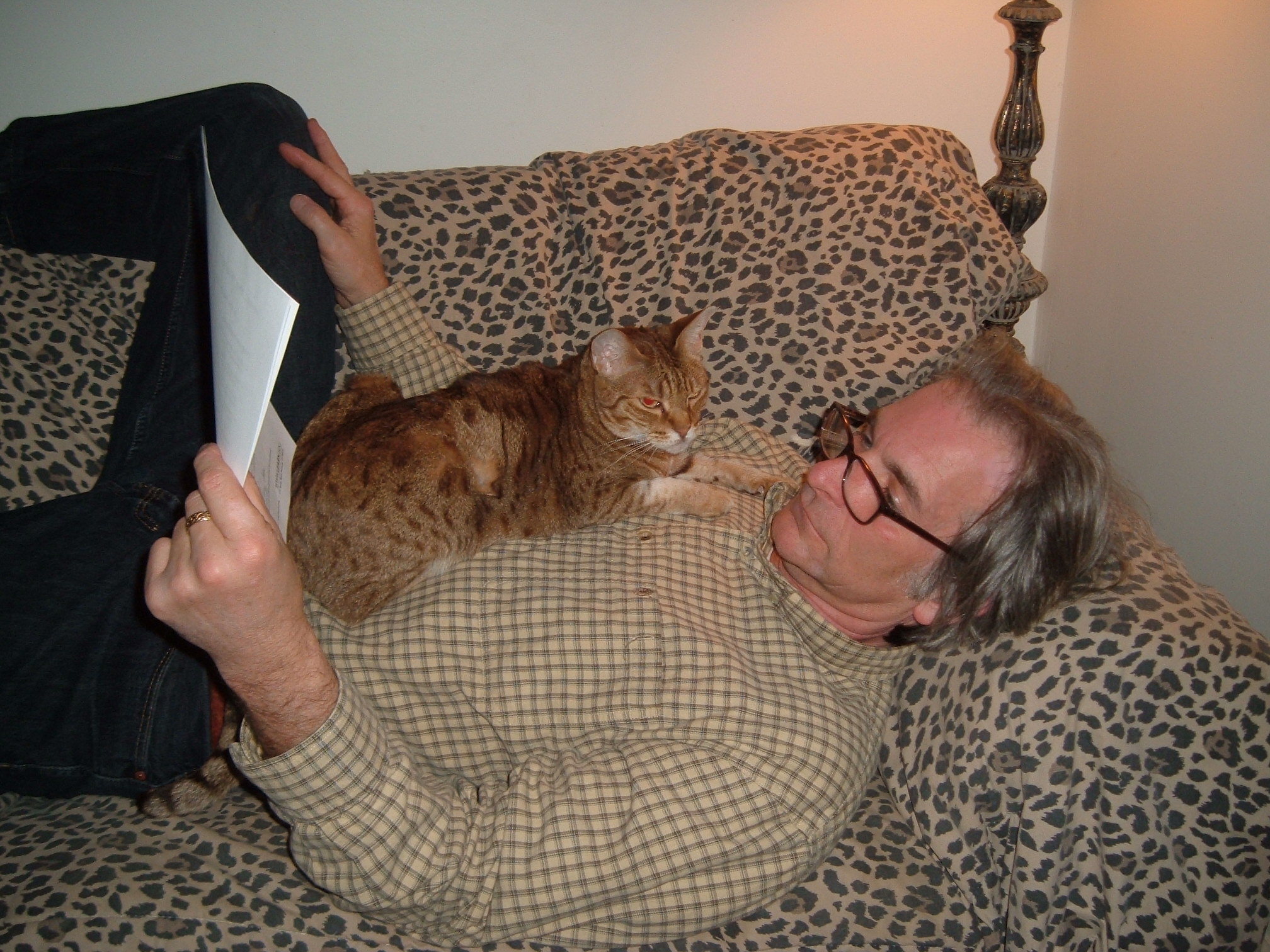 I always enjoy receiving messages and artwork from kids who have read my books or listened to my stories. The following interview contains answers to the questions most frequently asked by teachers, parents and kids.
Where do you get the ideas for your books?

I feel that if you are going to be an author or storyteller it is very important to know your own family story. If you start with your family tree, you may be surprised at what you'll discover. I have been able to trace my family's genealogy back for seven generations on my father's side, to Northern Ireland, and for thirteen generations on my mother's side, back to Switzerland. My ancestors were frontier folk who came to the Appalachian mountains of Central Pennsylvania after the Revolutionary War and cleared farms out of the wilderness. Everyone in my family, except for me, lives within ten miles of the
old family farm. So we have moved ten miles in 200 years—that's progress, eh? I started out by writing historical fiction novels which combined what I had learned about my family with my own experiences of living in the woods. Since then I have been able to travel to every continent on the face of the Earth (Except for Antartica) in search of stories and adventure. But the stories that mean the most to me are the ones that spring from my own family history.

Are the stories you tell true?

I tell a combination of original and traditional stories. Original stories come from my own experience and traditional stories are ones that come from the rich folklore that generations before have passed down to us. Sometimes, I will weave the two together into a new story. One example is my story, "The Cherry Tree Buck". This tale combined my real-life memories of growing up with my grandfather along with a tall tale that has been told for hundreds of years. I try to remember that a story is like a living thing that knows more than I do and that I need to allow it to grow and change, just like we do.

Many people have asked if the character "Maggie Callahan" is based on a real person. When I wrote my first book, "The Bread Sister of Sinking Creek", in 1976, I knew very little about my family history. In those days, I was living in a cabin in the woods and trying to figure out what I wanted to do with my life. Because my family has such a strong military background (I come from four generations of veterans, stretching all the way back to the Civil War) I thought I would be a career officer in the Army. I joined when I was 18 and served as a combat soldier in the Vietnam War. The war changed me in an important way: I understood that I was not cut out for military life. I still did not know what I wanted to do but I made some progress in that direction when I went to Pennsylvania State University (Thanks to government funding from the G.I. Bill) and graduated with a Bachelor's Degree in Journalism, making me the first person in my generation to go to college. I discovered that I loved writing. I worked on the local newspaper but still did not feel that I had found my true calling. Then I read a book that changed my life, "Walden" by Henry David Thoreau. Thoreau was a young man who had lived in a cabin in the woods because he wanted to find out about life. So did I. I moved into a cabin back in the woods, near Sinking Creek, and lived there for two and a half years. The cabin had no running water, no indoor plumbing and no heat. I carried my water from the stream in a bucket and heated with wood I cut with an axe and saw. It was there that I first got the idea for another kind of writing: one that came directly from the imagination. That was when the idea for "The Bread Sister of Sinking Creek" came to me. I went on to write three books about Maggie Callahan, a character I thought I had created out of thin air. At that time, I knew very little about my family history. But as I began to do more research into our family tree, I was astonished to learn that I really did have a Scots-Irish Great Great Grandmother who lived in a cabin near Sinking Creek. Her married name was Maggie Calhoun. A coincidence? I don't think so. I think I was learning an important lesson about becoming an author
and storyteller. I was learning that our ancestors lives are echoing within us, if we will only learn to listen.

How did you learn to tell stories?

I grew up in a family of great storytellers. But I did not know that you could do this for a living. In 1980, while I was working as a magazine editor, a friend invited me to go with him to the National Storytelling Festival in Jonesborough, Tennessee. For the first time, I discovered that some people were making a living telling stories. On that weekend, I found my calling. A year later, I quit my journalism job, published my first book and began my life as a storyteller in the schools. I have made my living that way for more than thirty years, have given more than 5,000 storytelling programs and have told stories to more than one million kids.

Do you live in the woods?

Yes! I am very lucky to live on the shores of a 365-acre lake in a 1,300-acre nature preserve in Bucks County, PA. Every day, my wife and I see White-Tailed Deer, Red Foxes, Raccoons, Rabbits, Skunks, Red-Tailed Hawks, Bald Eagles, Canada Geese, Wild Turkeys, Blue Herons and a multitude of songbirds. We have two big Shepard dogs who love to chase squirrels and an Ocelot cat who likes to sleep on my chest while I read. I have two grown children who are doing wonderful and important work out in the world. My favorite time is when our family is all together here in the peace and quiet of our home in the woods.

What advice would you give to kids?

It's important to do what you love. I have been very lucky to be able to tell stories, write books and teach adults and kids how to discover their own stories. The Great Scientist and Humanitarian Albert
Einstein once said, "If you want your children to be smart, read them fairytales." I feel that the storytelling tradition that our ancestors passed along to us is a precious gift. I am lucky that I have been able to have a role in keeping the stories alive so that future generations can enjoy them. If this is the kind of thing that appeals to you, you could build a life around telling stories in written and spoken word, just as I have.

Have you won any awards?

Over the last thirty years, I have won plenty of awards. I was named National Storyteller of the Year and Author of the Year by the Pennsylvania School Librarians. My books have been included in the top read-aloud books honored by the National Association of English Teachers and The National Association of English Teachers. I have received the Parent's Choice Award. But the most important reward I have received comes in the form of the letters and messages sent to me by kids and their families. If you would like to contact me by e-mail or (the old-fashioned way) by sending me a letter, I would love to hear from you.