Other Types of Programs Offered 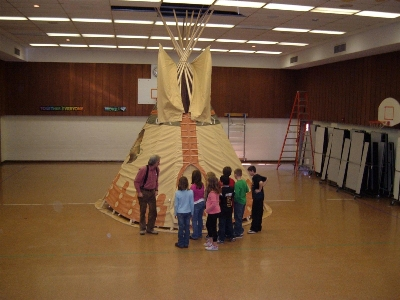 Robin offers a single 45-minute performance followed by a book signing. Performances include traditional and original stories, woodcraft and historical living skills, music and audience participation.  See below for more information on types of performances offererd.

"While Robin was speaking, the room was silent and the intense expressions on everyone's faces showed that they were living within, rather than just watching, the stories."
Dr. Maureen Sullivan, Academy of Natural Sciences
Philadelphia, PA

If you are interested in more than one performance, check with Robin to see if you qualify for Half Day Rate. You can book as many programs as you like in a half day. This can be any combination of performances, workshops or living history programs.

This plan offers maximum flexibility for program planner. Schedule the full day any way you like.

Parents and their children enjoy hearing some of Robin's family stories and learning how they can create their own family storytelling tradition. Robin also tells stories from his roots in the mountains of Central Pennsylvania, where his Scots-Irish Frontier ancestors have lived for more than 200 years.

While most of Robin's Programs are designed for students and teachers, parents and their kids, he also tells stories and presents workshops and gives keynote presentations for adults.

Robin has taught storytelling and writing on an undergraduate and graduate level for ten years at The Graduate Institute. He serves on the faculty of the Oral Traditions Program at The Graduate Institute at Mitchell College in New London, CT. His unique approach to story creating has been outlined in his audio recordings "Awakening The Hidden Storyteller"(Recipient of The Parent's Choice Award) and "The Natural-Born Writer" (Named A Top Audio Recording of the Year by Publisher's Weekly.)

Robin has been widely-acclaimed for his heart-rending performance of: "Vietnam: A Soldier's Story"

Robin comes from a long line of veterans, stretching all the way back to the Civil War. When Robin was 19 years old, he was a combat soldier in Vietnam. This is his tribute to Billy Reid, the man who saved his life in the jungle. Robin tells the story of their thirty-year friendship and their struggles to heal from the ravages of our nation's longest and most unpopular war. Performance is followed by a story circle in which everyone is welcome to share a memory of veterans and their families.

"I was really touched by Robin's story of the Vietnam War. It became real as he told it. He faithfully reported what he experienced, he took the unconscious and made it conscious. His story could have been my story if I had not gotten into the Army Reserves during 'Nam. Robin is a true healer who heals with this soldier's story each time it is told. What is more, I realize now that telling my stories can help others to heal."
--J.R.
Minister and Veteran
Milford, CT
Colleges and Universities

Juggling his roles as author, teacher and performer, Robin's presentations to both undergraduate and graduate students leave them with greater confidence in their own imaginative abilities.

"Robin Moore makes stories come alive like no one I have ever seen. He has presented to my university classes over the years and he has stimulated by students to both write and speak much more effectively. He has a knack for getting students past that self-conscious stage that so inhibits their creativity. He actually makes them WANT to communicate in the first place and provides a role model for how to do it well both in writing and speaking. And to top it off, he makes it just plain fun. He's worth his weight in pedagogical gold."
--Dr. Jim Hamilton, Pennsylvania State University
Mont Alto, PA

" Thank you for coming to King's College and sharing your many gifts as author, teacher and master storyteller with our community. The performances were truly an exquisite blending of images, gesture and the spoken word, which fired the imagination, re-kindled memories and helped all present to reclaim the richness and power of story in their lives. Numerous people commented about the power of your work and the impact of the images conveyed through your stories, to teach, to inspire, to uncover lost truths, to raise questions about life and its mysteries. Our lives have been enriched in the process."
--Bob Shearn, Campus Ministry
King's College, Wilkes Barre, PA